The talented junior, who left club gymnastics in search of more fun, said her love for the sport is back. 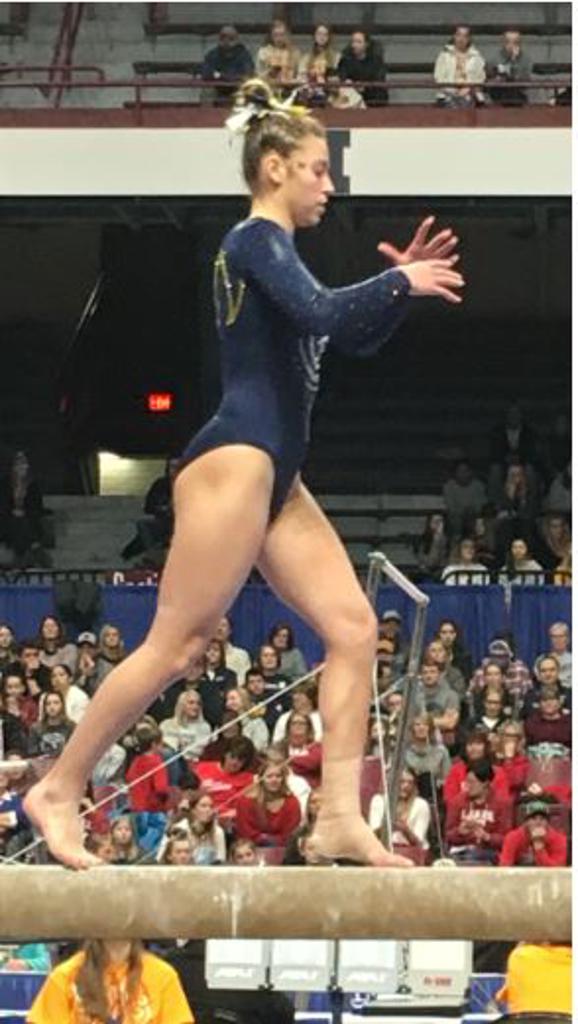 Mahtomedi’s Bella Frattalone competes on the balance beam Saturday at the Class 1A gymnastics state meet at Maturi Pavilion at the University of Minnesota. Photos: Jim Paulsen, Star Tribune

Mahtomedi coach Debbie Driscoll, a veteran of many a stressful moment in her 42 years coaching the Zephyrs, squatted next to the uneven bars as her latest superb talent, Bella Frattalone, was about to step up to the springboard.

Driscoll turned to the media table behind her and whispered, “What does she need?” She was curious what Frattalone needed to score to secure the Class 1A all-around championship.

Driscoll rolled her eyes. “So stressful,” she said. “But it’s a fun stress.”

Driscoll need not have worried. Frattalone, a junior in her first year of high school gymnastics, coolly nailed it, posting a 9.7, winning the all-around title with a score of 38.65, besting Detroit Lakes’ senior Cora Okeson by just one-half point.

When her uneven bars scores were posted Saturday at Maturi Pavilion at the University of Minnesota, Frattalone shared an extended hug with Driscoll. 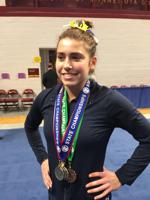 Bella Frattalone of Mahtomedi after winning the Class 1A all-around championship.

“I knew what I needed and what I saw that score, I was full of emotion,” Frattalone said.

It was a fitting end to one of the more memorable individuals duels of the meet. The rotations of the two competitors followed each other, with Okeson setting the bar high on each event and Frattalone following up with an equally robust score.

Frattalone was club gymnast before this season, reaching Level 10, the highest of the USA Gymnastics Junior Olympic programs. But gymnastics had become a chore, lacking the spark it once held, leading Frattalone to switch gears and join the high school team.

“I accomplished what I wanted to in JO and I wasn’t having as much fun in club,” Frattalone said. ”I just wanted that fun environment again.”

Okeson, who led the Lakers to the Class 1A team championship on Friday, had no regrets about coming so close to, but not reaching, an all-around championship. She took first place in the vault and floor exercise, and cheered teammates Jackson Hegg (uneven bars) and Peyton Jernberg (balance beam) to individual titles.

“These past two days have been so amazing,” said Okeson, whose competitive gymnastics career ended Saturday. “My last time ever competing, I honestly could not have asked for a better day.”

For Frattalone, Saturday may have been her official crowning as a champion, but she said the entire season was her biggest reward.

“I wanted to get that love for gymnastics back, and I did,” she said.