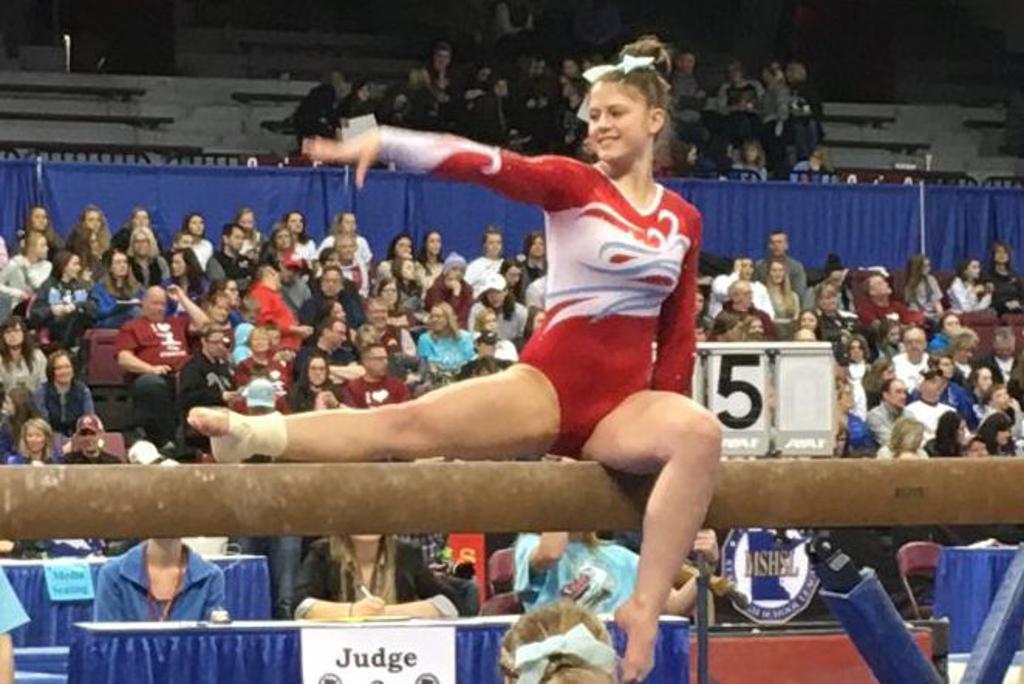 Peyton Jernberg of Detroit Lakes won the balance beam event in the Class 1A gymnastics individual meet Saturday at Maturi Pavilion on the University of Minnesota campus.

Aliah Williams woke up Saturday morning not knowing how she felt about the upcoming Class 1A gymnastics individual tournament.

She was, and she did it better than any other gymnast in the meet. Williams pulled out her best performance of the season en route an all-around score of 38.275, good enough to win the Class 1A all-around title.

A club gymnast until this season, Williams, who is also a standout track and field athlete, decided it was time to cut back on her gymnastics schedule.

“I was debating doing high school last year,” Williams said. “My body couldn’t take it, and I want to do track in college.”

She stuck with club gymnastics for one more season. “I wanted to get to Level 10 to I could say I got Level 10,” she said. “Then this year, I did high school and I love it.”

Chisago Lake coach Brett Kjos was stunned when Williams showed up at his first practice in November. “I’d heard she was coming out, but for the first few days of practice, I was thinking, ‘Oh my god, she’s really good.’ ”

Williams didn’t win any of the individual events, but she finished in the top five in each. She was third in the floor exercise and vault, fourth on the balance beam and fifth on the uneven bars.

It was her vault, Kjos said, that was her impetus to victory.

“She did a vault she hasn’t done all season, a layout Yurchenko,” Kjos said. “But it’s the state meet. Go for it.”

Williams had done the vault in club gymnastics but had tucked it away until the night before the state meet. “[Friday] in practice, I did one in the pit and I was like, ‘OK.’ ” she said. “It’s the state meet. Why not?”

She nailed it, scoring 9.725, tying her for second with Perham’s Jada Olsen. Olsen was awarded second place on the basis of cumulative judges scores and Williams third.

“I’m so relieved,” she said. “This is unbelievable.”