For defending state champion Neu, there's more fun to be had

Champlin Park's Chaney Neu is back to defend all-around title she won as a 13-year-old. 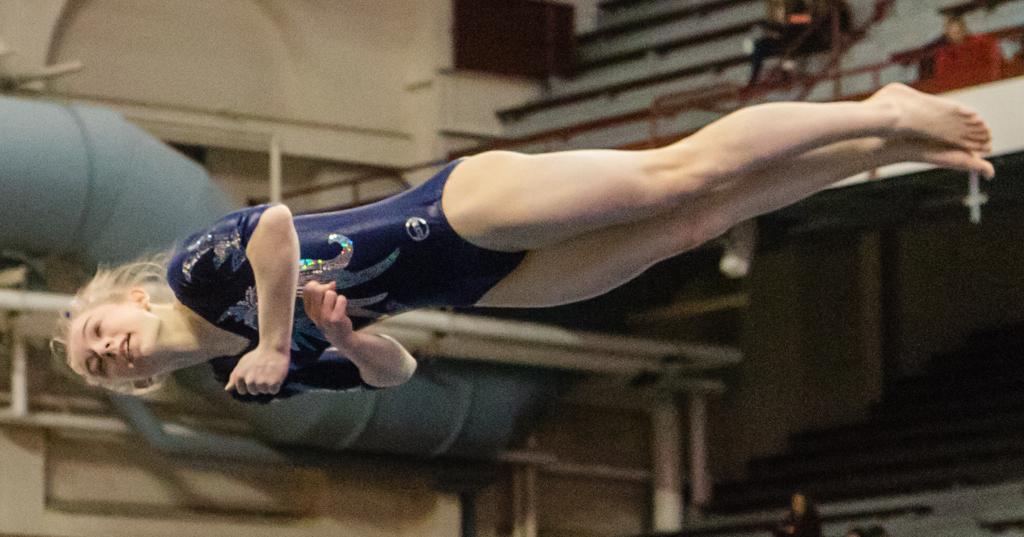 Champlin Park's Chaney Neu mid-jump during the floor exercise, in which she placed first at the Class 2A All-Around championship. ] Photo By: Matt Weber

It’s never been about talent for Chaney Neu. The Champlin Park freshman, who became the youngest state all-around champion at the 2017 Class 2A gymnastics meet, has the requisite physical skills to be one of the state’s top gymnasts.

Work ethic has never been a problem. Nor has her mental game. She landed a clutch vault on her last event of the 2017 meet, nailing a Yurchenko layout that judges scored a 9.8. It not only won the event, but it vaulted her into first place in the all-around.

“She’s an exceptionally bright young lady,” said Rebels coach Jon Wynia. “She’s at a different level with her intensity. She definitely has the ability to focus.”

So far, Neu has managed the pressure of being a state champion. Her scores place her in the top two in the metro in three events — vault, floor exercise and uneven bars — and the all-around and her 9.65 on balance beam are top-five.

Everything appears to be in place for Neu to make a serious run at another title, with one significant improvement: She’s enjoying herself.

“I came into this season thinking I want to have more fun and not put so much pressure on myself,” Neu said.

Neu admittedly eschews the spotlight, preferring to perform away from peering eyes. The accolades and fanfare she received for her 2017 successes made her uncomfortable. “I don’t like the attention that much,” she said.

So, in her quest for fun, she looked to the team.

Neu finished third in all-around as a seventh-grader in 2016, the same year Champlin Park qualified for the Class 2A team competition. Recalling that experience has paid dividends this year.

“When the team went in seventh grade, that was really fun,” she said. “So I’ve been embracing the team aspect more this year.”

That includes taking on a greater leadership role, one commensurate with a state champion.

“She has a better understanding of who she is,” Wynia said. “We’re a team of predominantly freshmen and sophomores, and in that group, she has the most experience. You can see it in her encouraging teammates. We’ve had conversations about it: Relate to them, correct them, encourage them. A compliment sandwich.”

Clearly, it’s worked. Champlin Park is back in the state tournament as a team, having slipped past rival Maple Grove in the Section 5 meet.

“Honestly, the best moment of the season was when our name got called to go to state,” Neu said. “The team is the most fun for me.”

Wynia said he noticed the change in Neu midway through the season, during a drill called “Smile Sits.” One gymnast goes through her floor exercise routine while the rest of the team sits in various places around the mat, counting how many times the gymnast makes eye contact and smiles during the routine.

“Normally, she’s so intense that you’ll get a smile or two at the beginning or the end,” he said. “She came out, put on her game face, struck the opening pose, then cracked a huge grin. We knew it was on. We counted something like 47.”

Neu’s rationale for her commitment to enoying herself is simple.

“There are three more years in my high school career,” she reasoned. “I just want to have fun, no matter what happens.”

At the Maturi Sports Pavilion

Preview: Defending champion Lakeville North is ranked No. 1, but there are plenty of other teams with legitimate title hopes, including No. 2-ranked Stillwater, Owatonna, St. Cloud Tech, Cambridge-Isanti and Champlin Park. Champlin Park’s Chaney Neu is back to defend her all-around title but will face strong challenges from Henry Sibley senior Sophie Redding, Wayzata’s Grace Treanor and Lakeville North’s duo of Rachel Steiner and Cali Berg.

Preview: Detroit Lakes, the three-time defending champion, is the best team in the state regardless of class. The Lakers posted an impressive 152.375 in the Section 8 meet, the highest score in the state this season. It would take a collapse of gargantuan proportions for anyone else to ascend to the top of the podium.