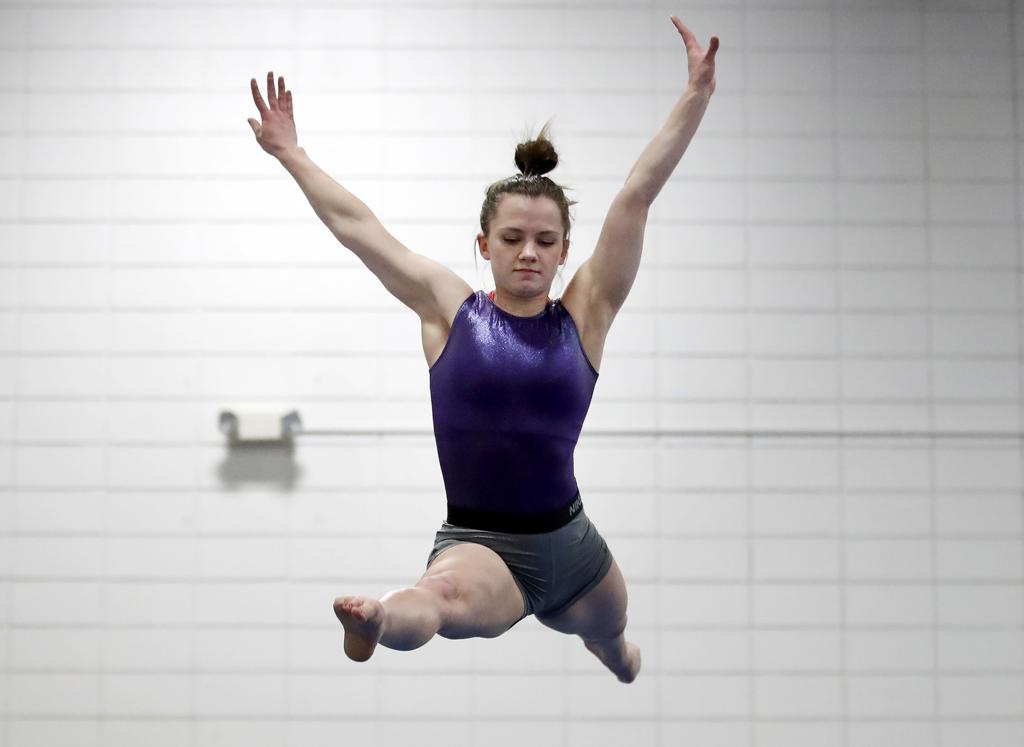 Edina’s Megan Haug lay on the landing mat behind the vaulting table before the 2016 Class 2A gymnastics state meet last March, her competition over before it began. In her first year as a high school gymnast after a lifetime of club training, Haug, then a junior, had planned to unveil a new vault, a double-back tuck, for the state meet. An event championship, maybe even an all-around title, was reachable.

Two vaults into her warmup, the unthinkable happened.

“When I hit the vaulting table I could tell something was off,” Haug said. “But I just went for it and landed short. I just crunched my ankle. I got up and tried to keep going, but I could not walk on it at all. I was mad. I was so excited to compete.”

She tried tape and ice and tried to walk it off, but she realized there would be no Kerri Strug moment. Haug, who had reached the elite Level 10 in club gymnastics with barely a bruise, was out for the biggest meet of her life just hours before it began.

“It was frustrating,” Haug said. “I’d been in gymnastics for so many years and never really got hurt. I was super annoyed because it was, like, why now? Here I am at the biggest meet of my life and I can’t compete.”

Edina coach Krysta DeLong, a former gymnast, said she may have taken the injury worse than Haug did.

“She’s so down-to-earth. She doesn’t really like to call attention to herself,” DeLong said. “You really want to see her do well. I kept it together when she was on the mat, but as soon as we got over to the [training] table, it all came out. I was just ‘waaaahhhhh.’ ”

Haug has turned last season’s misfortune into this season’s motivation. At the time of the injury, she was taking a wait-and-see approach to a senior year of gymnastics. A few months of healing gave her time to think about her future. She realized she had some unfinished business she needed to take care of.

“I feel like it was a blessing in disguise, honestly,” Haug said. “I feel like I have more motivation this season to come back and do better because it didn’t end how I wanted it to.”

Using the disappointment of 2016 as a spur, Haug hit the gym hard over the summer and fall. “I just kept thinking I need to get back. I need to work super hard and get back to state,” she said.

So far, Haug is on track to do just that. She’s won the all-around competition in every meet in which she’s competed, including a victory in the Jackson County Central Invitational on Jan. 21, where she posted a season-high 37.775. She set a school record in, ironically, the vault on Jan. 7, posting a 9.7 at the New Prague Invitational.

“Megan has worked so hard to come back and she’s never complained,” DeLong said. “She’s coming into her stride and looking better this year than she did last year.”

There is still work to do if Haug wants to realize a state championship in her final year of gymnastics, however. Her top all-around score is just the 10th best in the metro, and there’s plenty of room for improvement on the balance beam and the uneven bars.

DeLong is certain that Haug is getting close to her best and expects Haug to be at her peak when the section meet rolls around.

For her part, Haug is determined to qualify for the state meet and get a year’s worth of bad taste out of her mouth. But she has no firm goals.

“A lot of seniors go into their senior years thinking ‘Senior Slide’ but not me. I can’t do that. I need to come back strong,” she said. “I would like for us to make it to state as a team and for myself in the all-around and other events. But there are a lot of good gymnasts out there. I’m excited just to get the chance to go out there and see what happens.”