Northfield's Bailey DuPay scored a 9.9 on the floor en route to her championship 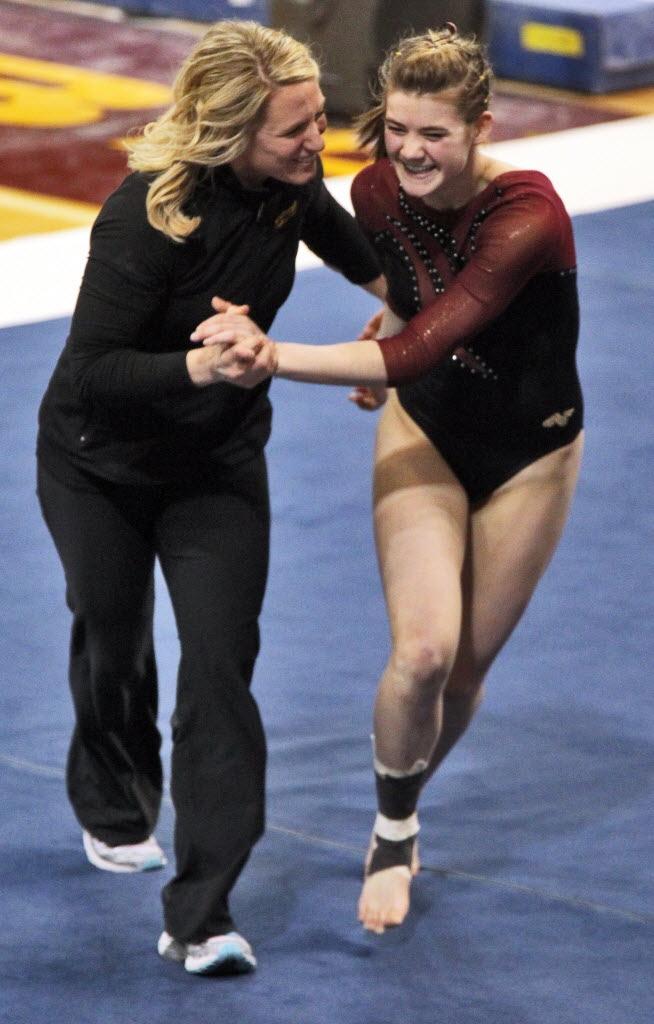 Northfield's Bailey DuPay celebrates with her coach, Melissa Bernhard, after scoring a 9.9 in the floor exercise

As the Class 2A gymnastics individual finals progressed, the crowd at the University of Minnesota Sports Pavilion was getting restless, waiting for that someone to step up and seize the moment.

While others tried, it was Bailey DuPay who succeeded. The Northfield sophomore sent a charge through the arena with a near-perfect floor exercise routine, earning a standing ovation with a score of 9.9, the best single-event score of the entire meet.

"When I saw the first 9.9, I couldn't believe it," the usually stoic DuPay gushed. "Then the other judges put up 9.9s and it hit home. It was an amazing feeling. I couldn't help myself. I had to celebrate a little."

Bursting with confidence, DuPay clinched the all-around championship on her final event, harnessing her emotions enough to score a 9.7 on the vault.

"I told her that she couldn't be too happy," said coach Melissa Bernhard, dousing the emotions of the moment with a bigger payoff in mind. "Luckily it was the vault, a power event where things can carry over."

Dupay finished with a score of 38.875, capturing event titles in the floor exercise (obviously) and the balance beam (9.55) in the process. Toss in the Class 1A diving championship she earned last fall and a strong argument could be made that the 5-foot-4 DuPay is Minnesota's best high school female athlete.

DuPay did all this on a gimpy right leg that had been showing signs of a stress fracture, making her performance even more impressive and leaving observers to imagine what she could do in perfect health.

"I said at the start of the season that this would be my last in gymnastics. I was going to stick with swimming so I didn't get injured so much," DuPay said. "Now I'm not sure. I really love gymnastics. I don't know if I could leave."

Isis Muller of Roseville was second in the all-around with a 37.95. Kaylee Jondahl of Elk River took third with a 37.925 and won the vault with a 9.825. Roseville's Carly Wagner won the uneven bars with a score of 9.8.