Difficult routines require strong and experienced spotters, and fewer males are available to protect the gymnasts. 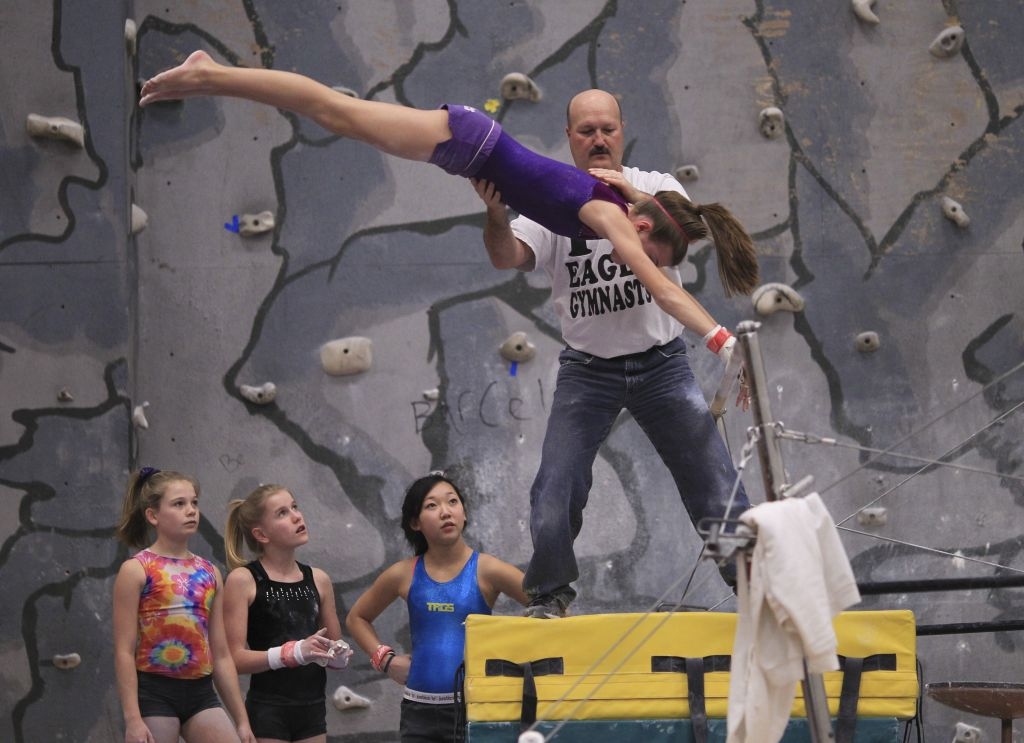 Evan Eklin stands next to the landing mat, eyes fixed on the far end of the runway, waiting for a gymnast to begin her approach to the vaulting table.

His outward demeanor projects calm as he determines angles and variations. But his mind anticipates the myriad things that can go wrong: a poor angle of approach, misplaced hands on the vaulting table, an under- rotation on a somersault.

The vault might not be perfect, but because of Eklin and those like him, errors will remain small, allowing the gymnast the best chance for success and, most important, the chance to do it all over again.

Eklin, 50, an assistant gymnastics coach at Eden Prairie, is better known in gymnastics parlance as a "spotter." Considered the sport's safety nets, spotters are trained as the last line of defense between a gymnast and the unforgiving nature of physics if their flips and contortions go wrong.

But Eklin and others like him are a vanishing breed. Minnesota State High School League restrictions on when they can work with athletes, coupled with fewer trained male spotters, could hold back the quality of future performances.

"It's mostly about the safety of the gymnast," Eklin said. "That's the number one concern."

No boys in, fewer coaches out

But it's strictly a girls-only endeavor. It's been more than a generation since boys have competed in high school gymnastics, the victims of dwindling participation as other sports gained popularity. The league ended its sponsorship of the state meet in 1988. High school competition was abandoned altogether in 1991.

The decline has rippled into the ranks of coaching, which in all sports draws heavily from former athletes. Fewer boys in gymnastics has meant fewer male coaches later on.

"The fact that there is no longer high school gymnastics for boys is an extreme detriment to our sport," St. Cloud Tech co-coach Colleen Stark-Haws said.

Go to a large high school meet and it's the same faces putting girls through their paces, setting up equipment, always watching for potential catastrophe. Those faces are getting older.

Eklin, a former high school gymnast and coach, has been assisting at Eden Prairie for more than a decade. Others such as Mike Lantz, a former gymnast for Eklin at Robbinsdale, and longtime coach and spotter Charlie Aydt have traveled from school to school over the years, taking spotting jobs as they become available.

Many women fill the spotting roles with no drop-off in safety, but many coaches agree that the lack of men -- and the size and strength they provide -- is troubling.

Suzanne Hecht, a doctor at the Institute for Sports Medicine and physician for the University of Minnesota women's gymnastics team, said men have physical advantages as spotters.

"On average, men have greater upper-body strength than women," Hecht said. "That doesn't always hold true in individual circumstances but, on average, men are usually taller and stronger."

As longtime Bloomington Jefferson/Kennedy coach Leslee Wright put it: "For my size, I'm not comfortable spotting some of the skills the girls do now."

Eklin said the focus is to protect the gymnasts. League rules prohibit coaches from working with gymnasts in the offseason, save for a seven-week window in the summer. He believes that makes it difficult to attract men to high school gymnastics as coaches and spotters.

"Since our jobs aren't full-time and we can't spend time coaching in the offseason, it's hard to train spotters," Eklin said. "We don't do too much on the floor early in the season."

Eden Prairie senior Mackenzie Dent is one of the top gymnasts in the state. Club-trained until 11th grade, she said she was startled by the lack of men spotters in the high school ranks.

"I grew up with male spotters," Dent said. "So I feel comfortable with a male because they're stronger. I rely on Evan a lot. I look at other teams that don't have any men spotting and I wonder how they do it."

Some point to better equipment and an emphasis on fundamentals that have ensured the sport is still thriving despite the drop in men as spotters.

"I don't see it as a gender issue," said Tony Brough, a former University of Minnesota gymnast and current gymnastics judge. "It comes down to offseason training, practicing in the proper progression, and competing the right way. I don't see this change as a problem. It's just different."

Northfield co-coach Melissa Bernhard, who has guided the Raiders to back-to-back Class 2A championships, believes a trained eye is more vital than physical strength.

"Much of spotting is confidence and the time to work on it," she said. "At clubs, the male coaches get to work with the gymnasts year-round. At high schools, the number of male spotters who know anything is getting fewer and fewer."