Energy she sacrificed in Friday’s team meet was rebuilt by a big score on vault. Ava Bruegger of New Prague finished second and Hannah Maccarone of Eagan third. 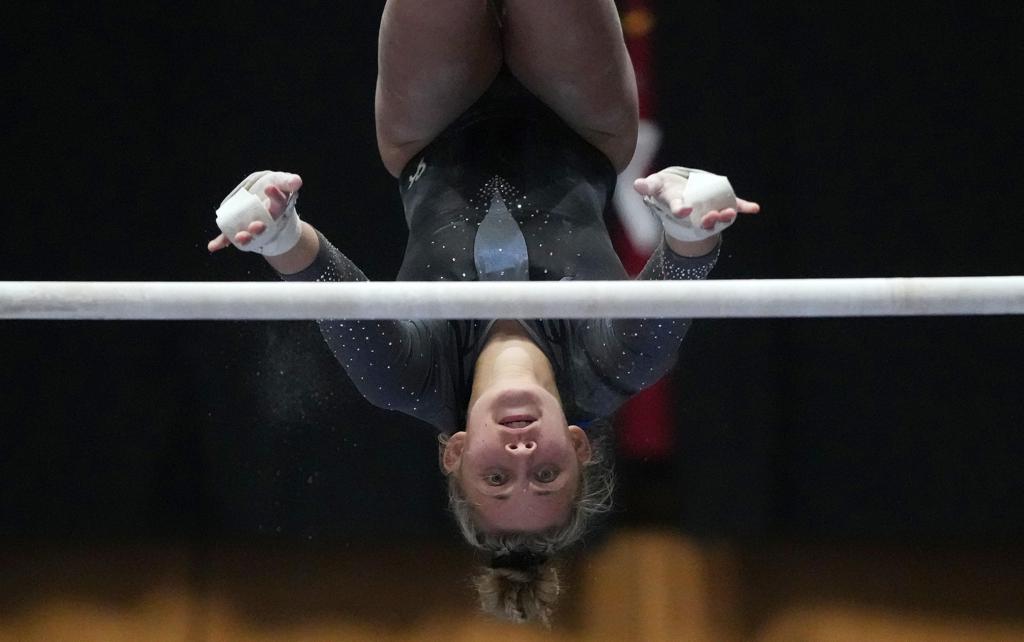 Taylar Schaefer of St. Cloud showed on the parallel bars that she's as good upside-down as right side up. Photos by ANTHONY SOUFFLÉ, Star Tribune

After a long day Friday, when she helped St. Cloud’s combined gymnastics team to a third-place finish in Class 2A in the state meet, Taylar Schaefer was weary.

The junior had a stellar effort in the team competition, posting the best individual score of the day in the vault and finishing with a combined all-around score of 37.9, but it wore her out.

“I felt kinda tired, to be honest,” Schaefer said.

She started Saturday’s individual competition on the vault, her favorite event. Fortunate, as she was able to draw energy from a terrific pike tsukahara on her second vault, posting a meet-best 9.725.

She rode that momentum to the Class 2A all-around championship, her score of 38.3 putting her almost a full point ahead of runner-up Ava Bruegger of New Prague, who finished with a score of 37.4.

Eagan’s Hannah Maccarone, who led in the all-around for much of the meet, was third with a 37.35. Her chance to win ended when she fell off the balance beam, her final event of the meet.

Schaefer, who dramatically collapsed into the arms of a teammate after her vault, admitted that her early success provided the fuel she needed for the rest of the meet.

“I love vault, so I don’t like to get it out of the way right away, but it was good starting on something I can nail,” she said. “It got us energized for the rest.”

It’s not insignificant that Schaefer used the plural “us” instead of “me” in her comment. She’s known for putting the team ahead of herself. Anything that’s good for her must be good for the team.

“We’re down here for the team,” she said. “Individual is just kind of a bonus. I wasn’t really thinking a lot about [the all-around competition], but now I’m pretty happy about it.”

It wasn’t until after her third event of the day, the balance beam, that it finally occurred to her that she was in line to walk off with the biggest prize. She stunned even herself with a meet-winning 9.75, putting her in strong position to win with just the floor exercise to go.

“I was really nervous for beam,” she said. “After beam, it was kind of like a weight lifted off my shoulders. We just had floor left, and our floor is like a party.”

Schaefer proceeded to add the floor exercise to her list of victories, winning with a 9.55.

The only event she didn’t win was the uneven bars, which went to White Bear Lake senior Grace Squires with a 9.65.

After the meet, Maccarone, whose gymnastics career ended Saturday, was satisfied by her effort despite her unfortunate conclusion.

“Not everything went as I had hoped or I had planned, but ultimately in these past 15 years, the good has outweighed the bad,” she said. “This meet doesn’t define me. I’m overall really happy with how I did despite some bumps in the road.”