Refusing to wiggle, Wayzata goes big on beam and pulls out a Class 2A team victory

Three other teams were positioned to win when the Trojans nailed their final event en route to a state championship. 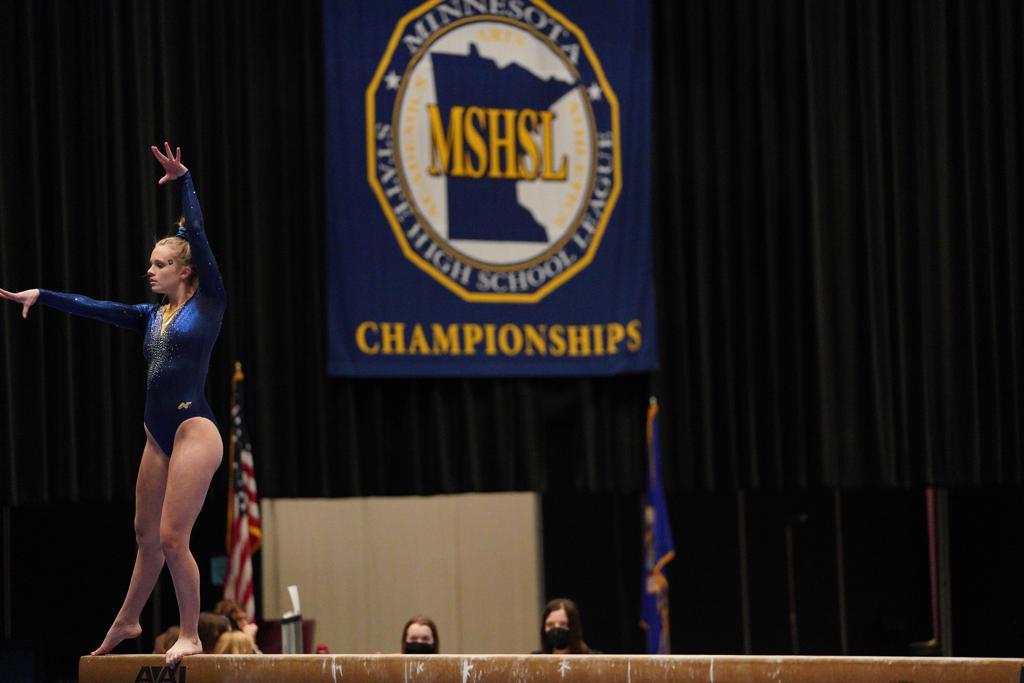 Sasha Arne of Wayzata posed on the balance beam, the event that made her team the 2021-22 gymnastics champion in Class 2A. MSHSL photo

Wayzata did it the hard way, but it was the result that mattered.

The Trojans were frustrated with the way they began the Class 2A gymnastics meet Friday at Roy Wilkins Auditorium in St. Paul. Their overall floor exercise, often a high-scoring event, was not up to their usual standards.

So coach Carly Holden drained the pressure from the situation. “We just had to change how we approached things. Now, let’s just have fun,” she said

It worked. Wayzata pulled out the victory by shining on what is generally considered the hair-raising event in gymnastics. The Trojans scored a superb 36.65 on the balance beam, the apparatus that has dashed so many gymnastics hopes, to slip past New Prague and win the Class 2A team championship. Wayzata posted a team score of 146.2. New Prague was second with 145.725, St. Cloud Tech third at 145.55

“We always try to tell them that beam is the make-it-or-break-it event in any meet,” Holden said. “We have been doing practice and telling them, ‘We’re going to make you uncomfortable.’ We did pressure sets so you can handle this kind of stuff.’”

That meant distracting gymnasts while they were on the beam: screaming at them, diving under the beam, following them for the length of it.

“I think it really helped us and it made us more confident, too,” said senior Sasha Arne, whose 9.3 score on beam was the best of five Trojans beam scores, all of them 9.0 or better.

“It was one of the best routines of my high school career,” Arne said. “I was super nervous, but I knew I had to be confident in order to not wiggle.”

Four teams went into their final event with a team victory in their sights. Holden had an inkling when it came down to Wayzata needing a strong showing on the balance beam. “Beam and [uneven] bars have been our strongest events this year,” she said.

The Trojans gymnasts didn’t know that the meet itself hung on their beam success. That may have been a key to victory.

“They had no clue,” Holden said. “They did exactly what we wanted them to do.”

“I don’t think we’ve ever hit 5-for5, with no wiggle,” Arne said. “We were practically perfect, and that had never happened before. We were just feeding off of each other.”