Stepping away from club gave her time for charitable ventures, and she also squeezed in pole vaulting, water-skiing exhibitions and a section championship. 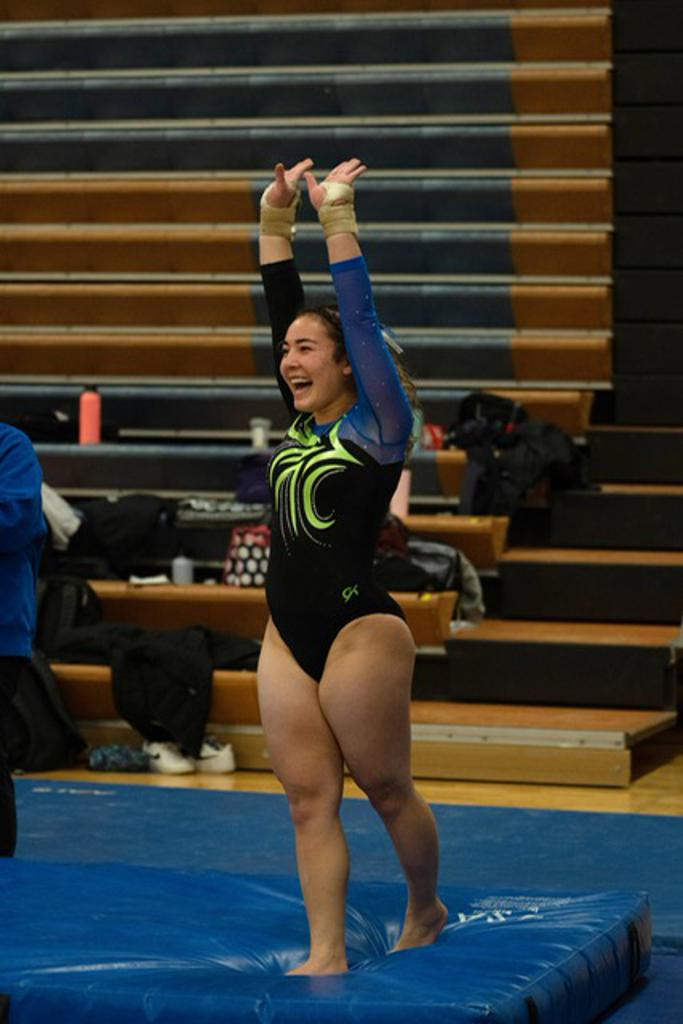 Hannah Maccarone wore a grin as she competed during the 2021-22 season. Contributed photo

After spending much of her young life in a gymnastics club, learning her craft, Hannah Maccarone was in ninth grade when reality tapped her on the shoulder.

There were other things in life just as important as gymnastics.

The effervescent Maccarone, a senior at Eagan, was a dedicated gymnast, 20 hours a week at least, when she realized she wouldn’t be able to touch as many lives as she wanted if she was spending so much time perched on a 4-inch-wide beam.

“I was a gymnast my whole life, since I was 2 years old,” she said. “I competed for TAGS [a prominent south metro gymnastics club] until I was in eighth grade. But I wanted to expand my horizons and try different things.”

She left TAGS and took up gymnastics at Eagan. High school gymnastics are generally less intense and time-consuming than club. She wanted to use some of that time to broaden her perspective.

She joined track and field and took up pole vaulting. She’s reached 9 feet in competition, 10 in practice.

“I love it. It fits me. You need to be comfortable upside down,” she said, laughing.

She also joined a water skiing club. She wasn’t an accomplished skier before, but now she’s an integral part of the Twin Cities River Rats, who put on shows on the Mississippi River in Minneapolis in the summer. Her gymnastics background, along with her 5-foot build, pays dividends as she’s often the top of skiing pyramids, where “my flexibility and balance help me.”

And then there’s her biggest passion, the school’s Interact Club, which seeks out and promotes volunteer opportunities. She’s the club’s president.

“I’m really proud of that,” she said, then ticked off the club’s accomplishments. “We’ve made baby blankets for single mothers in need, I’ve organized a couple of blood drives, which was important when we were having the critical blood shortage last year. We’ve had jacket drives and jeans drives, sent care packages to soldiers overseas. And last year we built our school’s first community garden. We grew and harvested vegetables and donated them to a food shelf.”

To Maccarone, life is something to be sampled and enjoyed. She believes few things are better than meeting and engaging with people, familiar or not.

“I’m definitely a people person,” she said. “I draw energy from friends, family and other people around me. It’s just super fun to be with people and to share experiences.”

“She is one of a kind,” said her coach, Shelly Eklund. “Her contagious smile, her spunky, bubbly personality. She is such a strong leader. One of a kind. A coach’s dream athlete.”

When she de-emphasized gymnastics four year ago, she couldn’t walk away completely. She’s been the Wildcats’ top performer for the past two seasons and came within a third-place finish in the the floor exercise of sweeping the individual events at the Class 2A, Section 3 meet. She posted an all-around score of 38.45 this season, the best in the metro and a personal record.

The state meet will be the final gymnastics competition of her life, and she admits it will be emotional. She has some fireworks left in her arsenal — a layout Yurchenko vault, a double-back dismount on the uneven bars, a back handspring layout on the balance beam — but is simply hoping to show well in her final outing.

She never seriously thought about continuing gymnastics after high school, recognizing it would interfere with her wishes to do more for others in college.

“One thing I’m really proud of is my compassion and the love I have for others,” she said. “I think there’s great value in having a kind heart.”