The junior used the memory of a forgettable 2019 state meet to help prepare for her Class 1A all-around championship-winning performance culminating with a personal best score. 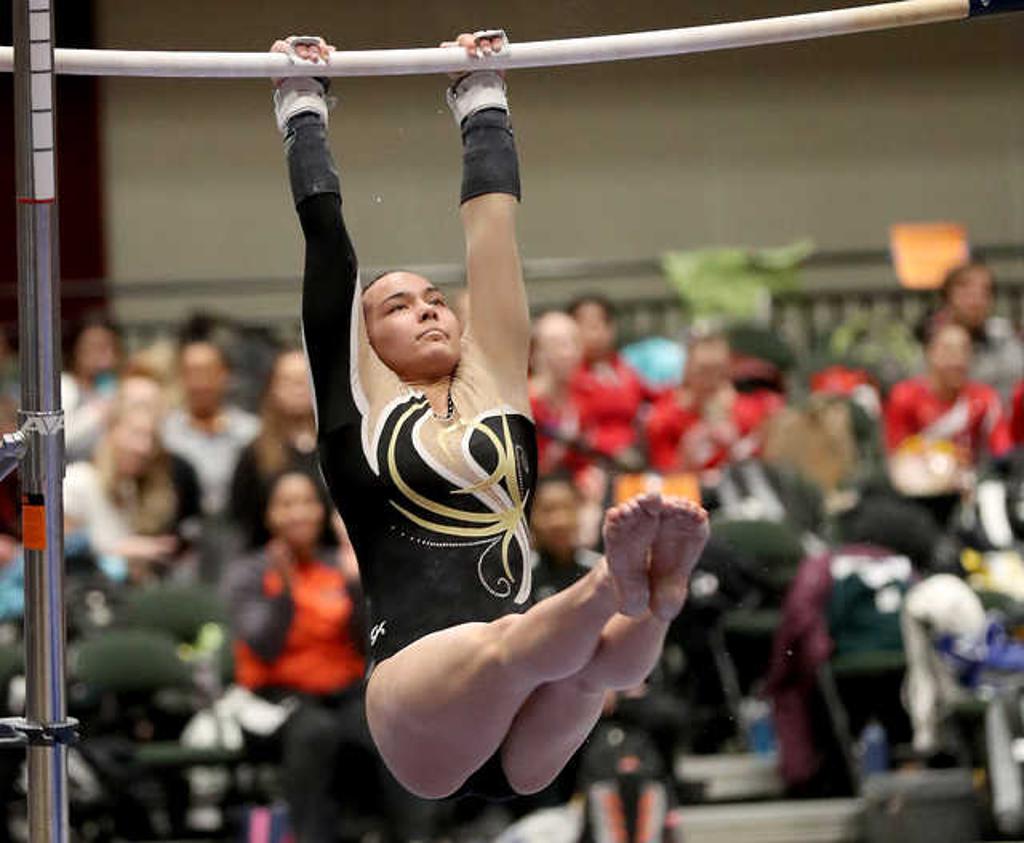 Growing up in the gymnastics hotbed of Perham, Jada Olsen has trained around state championship banners for nearly her entire life.

Someday, she thought, her name is going to be up there as a state champion, too.

That goal came true Saturday when the Perham junior rode the momentum of a stellar opening routine on the uneven bars to the Class 1A all-around state championship.

Olsen posted a personal best score of 38.625 to finish ahead of close friend Jackson Hegg of Detroit Lakes, who finished second with a 38.475. Annandale’s Becca Green finished third, scoring 38.40.

“In seventh grade, it was definitely one of my goals,” Olsen said. “I’d made it to state as a seventh-grader and took sixth in vault, so I knew it was a reachable goal. I just wanted to see how long it would take me to get there.” 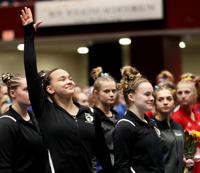 Olsen’s coach, Jenna Kupferschmid (nee Schmitz) was the all-around champion in 2010. Olsen remembered being awed by Schmitz and other Perham champions when she was just starting out.

“We went to meets when I was little and she was always on top, always winning, her and Kelsi Vomacka and Carly Peterson,” Olsen said. “I wanted to be just like them. Now I can be up there right next to them.”

Olsen had a forgettable 2019 meet, having gotten sick just before competition started. She used that memory to settle pre-meet nerves.

“I came in with the mentality that it can’t get any worse than last year,” she said. “It took a lot of the pressure off. If you can’t do any worse, you’re bound to do better.”

She and Hegg matched scores of 9.65 on the uneven bars to open the meet. Olsen then conquered her usual nemesis, the balance beam, with a solid 9.45.

Getting her two most concerning events out of the way, Olsen tied her season high with a 9.7 in the floor exercise, which tied her for second in the event. She closed with the vault, her specialty, and put up a meet-winning score of 9.825 and securing the all-around crown.

“As soon as the tough events are out of the way, you have this overwhelming sense of calm,” Olsen said. “You know that you can make mistakes in the other events — nothing is going to be handed to you — but you only have little corrections to make and you’ll be fine.”

Olsen, who also coaches young gymnasts, said her victory was not just for her but also for the girls she teaches.

“There are so many little girls who look up to me, so to have this as an example of how hard work can pay off for them, it’s a really great thing.”

In other events, Hegg won the floor exercise with a 9.75 and Green, a pre-meet favorite, rebounded from a subpar floor exercise routine to win uneven bars (9.85) and balance beam (9.65).

“I set the [Class 1A] state meet record on the bars, so that was big,” Green said.

The key to her two event victories, Green said, was that she was nervous before each. “I think that helped,” she said. “I probably should have been nervous before the floor exercise.”

Worthington eighth-grader Hali Bullerman hit her feet on the high bar during her dismount from the uneven bars and landed face-first on the mat. The meet was delayed for more than 15 minutes while medical personel attended to her. She was taken off the mat immobilized on a stretcher, but a source said that was precautionary and that she’d suffered no serious injury. She was brought to a nearby hospital for testing for a potential concussion.