Big Lake gymnastics 'family' gets it together in a championship way

Ranked No. 1 in Class 1A much of the season, the close-knit Hornets won the program’s first state championship in 20 years. 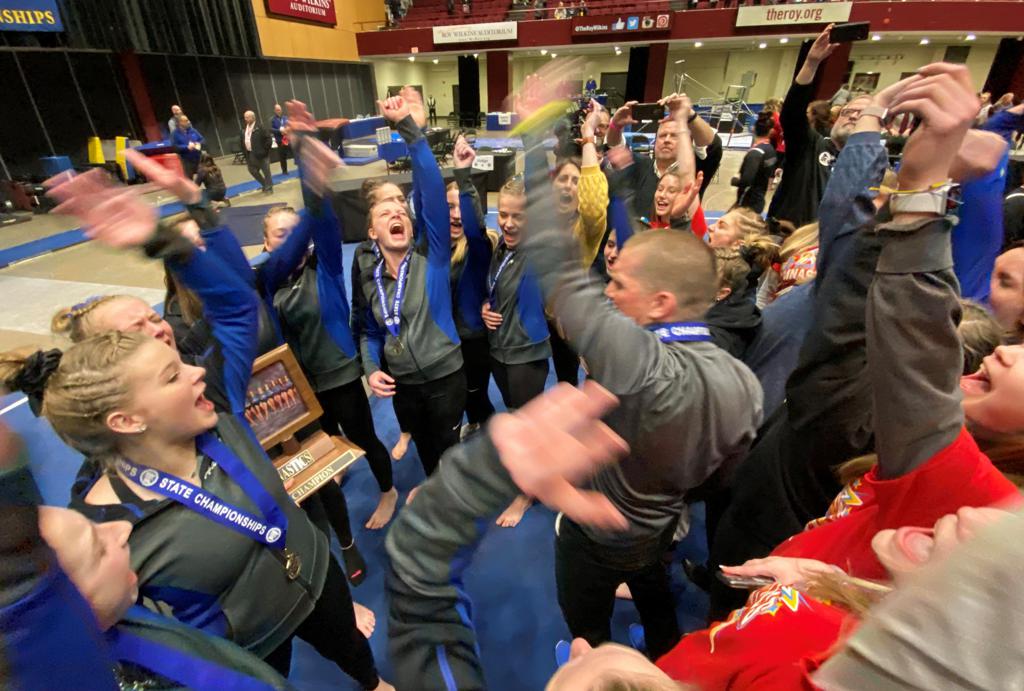 Senior Izzy Breitkreutz was doing her balance beam routine. Gathered around in a semicircle were her Big Lake teammates, holding hands and cheering vigorously.

One event later, the Hornets were taking their turn in the floor exercise. Without fail, the routine being performed on the floor was being mimicked by every member of the team, each just as passionate as the teammate actually doing the routine.

Some teams talk about togetherness. Big Lake shows it.

That unwavering support paid off Friday, spurring the Hornets to the Class 1A gymnastics state meet team championship at Roy Wilkins Auditorium in St. Paul.

“Wednesday’s practice, that’d what I stressed. Togetherness,” Big Lake co-head coach Lanny Goldsmith said. “It’s not just about one kid on our team. It’s about every kid on our team.”

Hornets senior Abby Schreifels always felt her team was close-knit, but winning its home invitational, known as the “Tropical Twist,” in early January turned those threads into steel cables.

“At the Tropical Twist, everything just clicked,” Schreifels said. “People realized we were all a part of something bigger. We needed to be there for each other.”

The Hornets won their first state title since back-to-back 1A championships in 1999 and 2000 by taking care of business on what most consider gymnastics’ toughest events. The posted a combined team score of 36.525 on the uneven bars to open the meet — the best score of the day in the discipline. They followed with a successful balance beam routine and had the lead at the halfway point of the meet, affording them to relax thereafter.

“Maybe relax a little too much,” co-head Nikki Dilbert said. “We had some uncharacteristic mistakes on floor [exercise], but in the end, our first two events sealed the deal for us.”

Dilbert and Goldsmith are brother and sister, adding to the Hornets’ family feel.

“We love being a family involved in gymnastics,'' Dilbert said. "My dad comes and does the scoring for us at every meet, my mom’s there putting up decorations. I think the girls just see that family and we breed that cohesiveness.”

That much was obvious to anyone who watched Big Lake’s effort Friday. “We competed with a lot of emotion,” Schreifels said. “We depended on each other.”