Two former club gymnasts flourish in high school, and not just in competition

Becca Green of Annandale and Livia Dombeck of St. Michael-Albertville are among the all-around favorites at the gymnastics state meet. 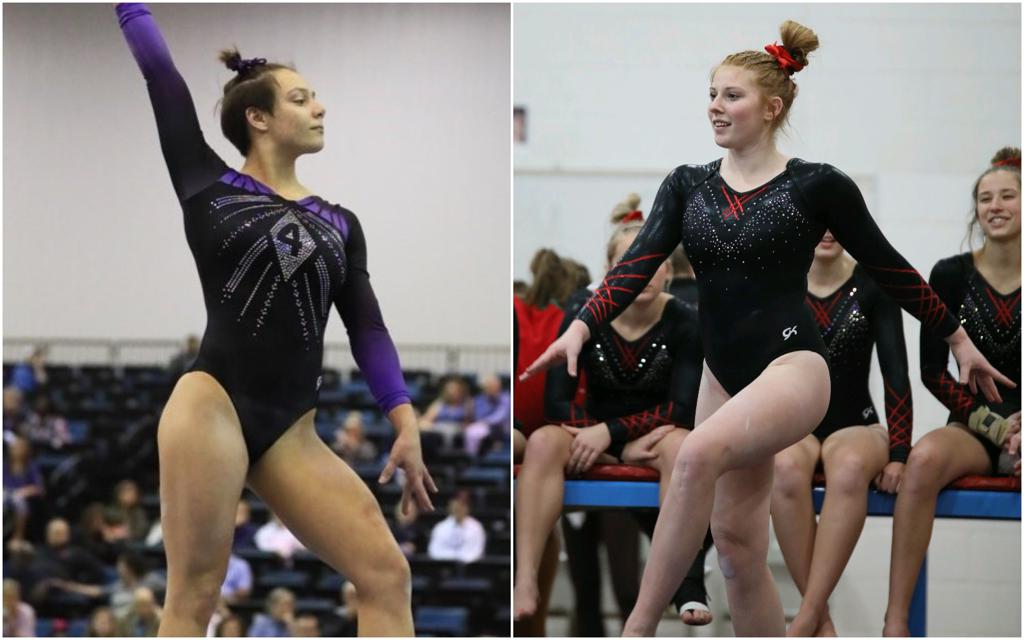 Livia Dombeck (left) of St. Michael-Albertville and Becca Green (right) left club gymnastics to compete with their high school teams. Both will be among the individual favorites at the gymnastics state meet. (Submitted photos)

Becca Green and Livia Dombeck had the same thought at the same time.

Gymnasts for most of their lives and teammates at the same gymnastics club for two years, both were seeking a change. Life was calling, things other than gymnastics occupying their minds.

“I was kind of looking for something a little different,” Dombeck said. “I wanted a little less pressure, to have fun and enjoy myself.”

Said Green, “I was always going to club and I didn’t have time for everything else. I was hitting my senior year and I needed to make some changes.”

Dombeck, a junior, withdrew first from her club team, Classic Gymnastics in Chanhassen, and made her way to St. Michael-Albertville’s high school squad. Green saw her friend make that bold step and reached out.

“I asked her what it’s like,” Green recalled. “She said the switch was a really fun experience and that I should take the chance.”

Green did, trying out for her high school team at Annandale and quickly becoming the Cardinals’ top gymnast.

Barely three months after going their separate ways, the two former club teammates will find themselves competing in the same tournament once again. Green is the all-around champion from Class 1A, Section 6 and posted the highest score of the season in Minnesota with a 38.975. Dombeck posted a 38.45 all-around during the season and placed third in the Class 2A, Section 5 meet.

Said Green, “I never had the desire to do high school before, but it’s been super memorable. I’d been friends with girls on the team before, but the friendships have gotten way closer.”

Her favorite part? “The long bus rides to meets. We get to sing and dance and laugh and get loud. In club, everyone was quiet and minded their own business.”

While Green was honing her talents in a high school gymnastics room, Dombeck took the opportunity to expand other interests.

“I’m in choir and I wanted to try theater as well,” she said. She got a small part in the school production of “Fiddler on the Roof.’’ She committed fully to choir as well, without feeling stretched too thin.

“The choir schedule is pretty vigorous. Gymnastics and choir always had a lot of conflicts,” she said. “To be able to be really in choir was awesome.”

Green’s mother, Nicki, was a coach at Annandale when Becca was growing up (she’s returned as an assistant this season) and brought her daughter to the state meet. “I thought it was awesome,” Becca Green said. “I’ve had the outer experience, but not the inner experience.”

Success at the state meet remains to be seen, but both competitors say they’ve already accomplished what they set out to do.

“I feel like I’ve gotten better grades, my overall stress level has gone down a lot, I get more sleep,” Dombeck said. “And I’ve gotten to know my teammates better.”

Green said she wished she’d made the switch sooner.

“I’m so glad I got to spend my last year with this team,’’ she said. “It’s definitely been an A-plus.”